My fourth great grandfather, William J. McCleery fits the bill for infamous ancestor, at least in our family. In fact, when my grandmother told me there were a few things in particular she wanted to figure out in her family tree, one of them was to learn the whole story of what happened to William McCleery. All she knew about him was that he had been MURDERED!

William McCleery was born in Broughshane, County Antrim, Ireland in 1826. I went to Broughshane with my Mom, Grandma, Aunt, and two cousins a few years ago. It is a very small little village. But the neat part was that there was a thatched roof inn that had been there since the 1773, and since William was born in 1826, it stands to reason that he had been there before. I spent about ten minutes just walking around and putting my hands on the stone walls! 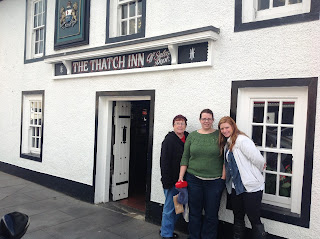 At 22, he left from Liverpool England and came to New York on a ship called the Chancellor. They landed on July 6, 1848.  Ship records list his occupation as laborer and show that he traveled with a relative named Henry. He moved to Bluffton and worked as a Shoemaker.  He married Julia Claspil in 1853 and had three children, William Jr., Mary Josephine (our grandmother) and Melissa.

On November 15, 1861 he enlisted in the Army to serve in the Civil War. He served in Company D in the Indiana 47th Infantry Regiment. This regiment traveled South from Indianapolis to New Orleans, Louisiana fighting in at least 11 Battles along the way. His regiment lost a total of 336 men during the war. William survived. He mustered out of the army on October 23 1865 and from Louisiana the Company headed home. They arrived in Indianapolis and were discharged to return to their homes on November 2, 1865.

We are lucky enough to have a letter that William McCleery sent home from the frontlines of the Civil War.  Below is the letter and the full transcript. William's military records give us a lot of information about him, for example his description: a fair complexion, grey eyes, sandy hair and 5 feet 9 inches tall.  For some reason it lists that he is born in Antrim, Md. instead of Antrim, Ireland. We don't know if this was intentional or just a miscommunication. 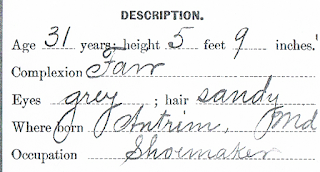 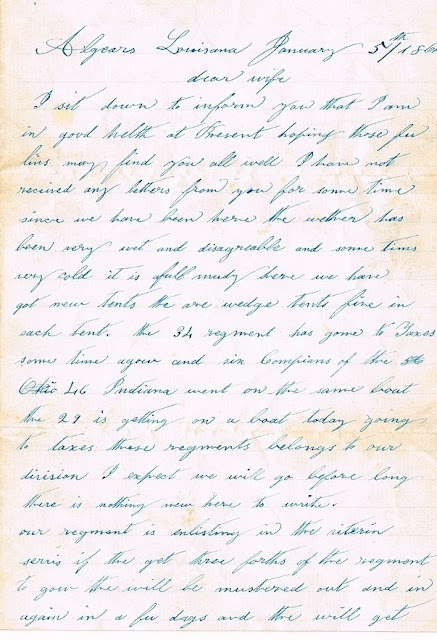 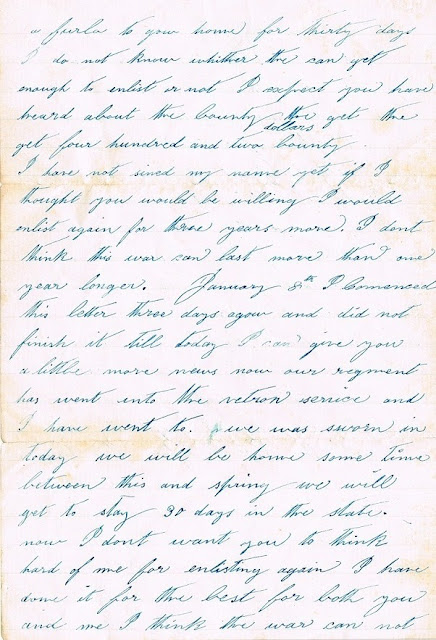 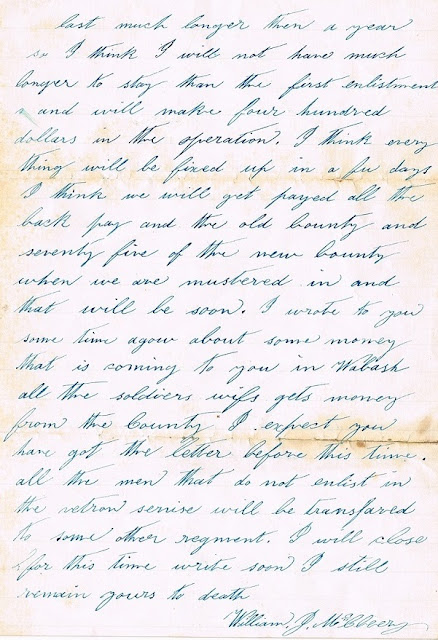 Dear Wife,
I sit down to inform you that I am in good health at present, hoping these few lines may find you all well. I have not received any letters from you for some time. Since we have been here, the weather has been very wet and disagreeable and sometimes very cold. It is full muddy here. We have got new tents, they are wedge tents, five in each tent. The 34 regiment has gone to Texas sometime ago and six companies of the 46 Indiana went on the same boat. The 29 is getting on a boat today going to Texas, those regiments belong to our division. I expect we will go before long there is nothing new here to write.

Our regiment is enlisting in the vetron service, if they get three/fourths of the regiment to join they will be mustered out and in again in a few days and they will get a furla to your home for thirty days. I do not know whether they can get enough to enlist or not. I expect you have heard about the bounty we get. We get four hundred and two dollars bounty.  I have not sined my name yet, if I thought you would be willing I would enlist again for three years more. I don’t think this war can last more than one year longer.

January 8th- I commenced this letter three days ago and did not finish it till today. I can give you a little more news now our regiment has went into the vetron service and I have went in to. We was sworn in today we will be home some time between this and spring we will get to stay 30 days in the state. Now I don’t want you to think hard of me for enlisting again, I have done it for the best for both you and me I think the war can not last much longer than a year so I think I will not have much longer to stay than the first enlistment and will make four hundred dollars in the operation. I think every thing will be fixed up in a few days I think we will get payed all the back pay and the old bounty and seventy five of the new bounty when we are mustered in and that will be soon. I wrote to you some time ago about some money that is coming to you in Wabash. All the soldiers wifs gets money from the bounty. I expect you have got the letter before this time all the men that do not enlist in the vetron service will be transfared to some other regiment. I will close for this time. Write Soon. I still remain yours to death

According to the military records William was missing without leave in July/August of 1863, but on the Sep/Oct muster roll card he has returned and is returned with full pay and allowances. He is not punished at all and is still promoted to Corporal. This leads me to believe that he had good cause. In early July, his regiment took part in the Siege of Jackson Mississippi. In the aftermath of the battle 800 union soldiers were wounded and 100 were missing. I believe he may have been one of those men and that led to his delay in meeting up with his regiment.

No more is known of William McCleery's life until he was tragically murdered in the Empire Saloon on July 25, 1870 by a neighbor named James Gillen.

The court records from the case no longer exist, but many news articles were written on the case. We aren't totally sure what started the disagreement, but we know that William verbally insulted James Gillen and his wife. James fumed about these insults and decided to do something about them. He asked a friend to borrow his gun and the friend refused, he later went to another friend and told this friend that he wanted to go hunting, he was given the gun.  He and William met later at the Empire Saloon, William asked the bar man for a drink of water and James Gillen confronted him, words were exchanged and then James fatally shot William in the chest.

Below is the news story of his death:

I have struggled to find news coverage of the trial. I did find a lengthy piece in the Fort Wayne Daily Gazette, it does lay out the cases, but it doesn't quite tell me everything I want to know. One portion in particular strikes me as interesting though, and makes me keep searching for coverage in other newspapers.

"The great murder trial now in progress at this place continues, and the interest does not abate in the least, although it has now occupied the interest of the court, (Judge Tously on the bench), ever since last Tuesday week. During the evening session from 7 until 9 the courtroom is crowded to repletion. Among the audience we notice most of the leading ladies of the town. The council for the defense fight every step taken and the prosecution is wary and watchful."

James Gillen was sentenced to only 12 years for the murder of my 4x Great Grandpa. The article says ten, but other documents including his pardon application said it was 12. While I was profoundly relieved that he hadn't been executed, I was shocked by the short sentence. I found an interesting op-ed by someone who was frustrated by the defense's strategy of using "impulsive insanity" as a reasonable cause for the crime. 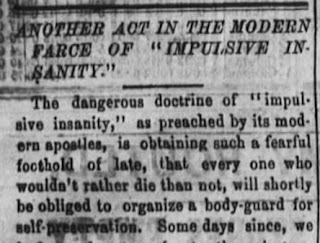 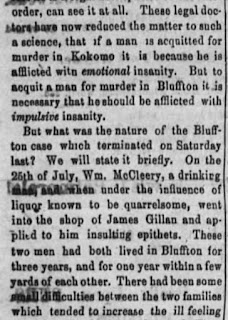 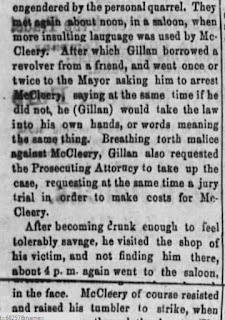 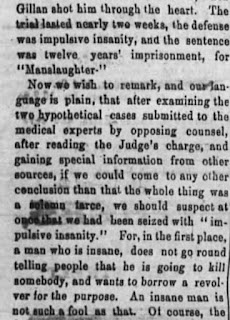 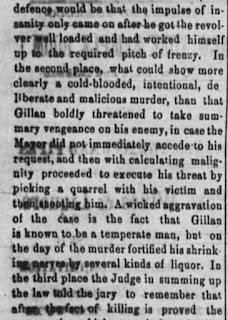 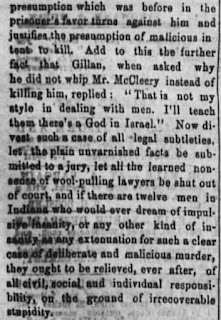 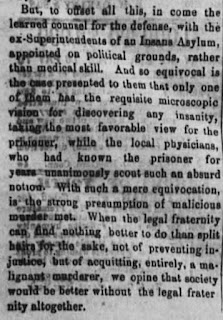 I have been so lucky to find this much information. but still I want to know more, and I keep looking for more details. I also plan to apply to have his tombstone restored, here is what is left of it. I hope I can have it restored and rededicated very soon. 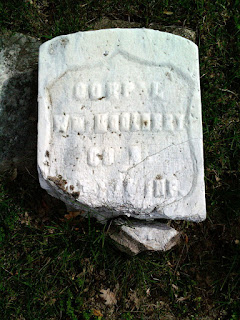 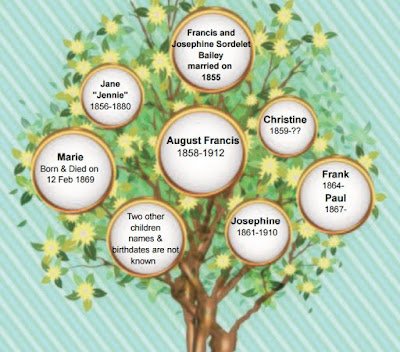 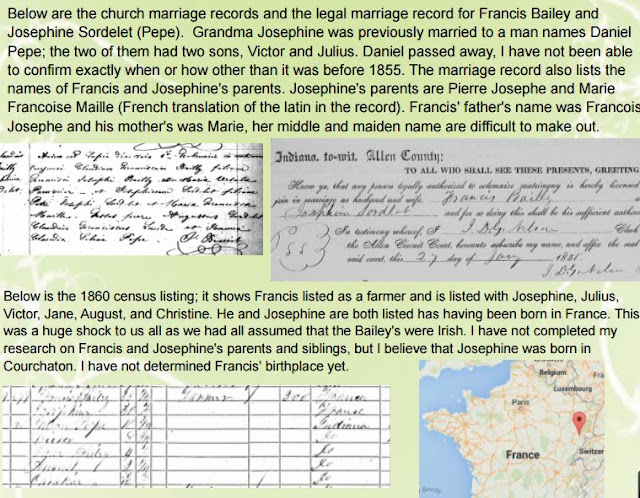 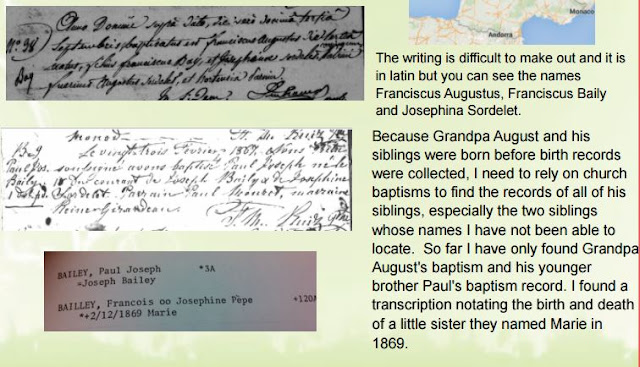 I don't know too much more about Francis Bailey other than that he served in the Civil War in the 152nd Indiana Infantry Co. H.  This company was organized toward the end of the war mustering in March 1865 and mustering out August 1865. I don't know anything of particular note about his service thus far in my research.

The next piece of information I have is the article that told of Francis Bailey's very horrible death. 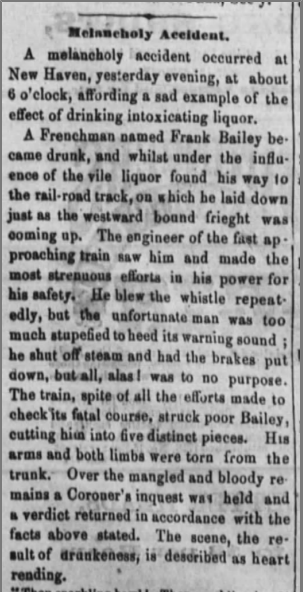 For me, when I found this article, it was one of those moments when I have had an unexpected, visceral, and emotional reaction to a family history discovery. The details of Francis' death were so horrific and must have been so devastating to his family that this article stayed with me for days afterwards. I couldn't stop thinking about what a horrible realization this would have been for Josephine.

In an incredible twist of fate, his son, my 3rd great grandfather, August Bailey was also killed by a train, although the circumstances of that tragedy were very different and that is a story for another day. 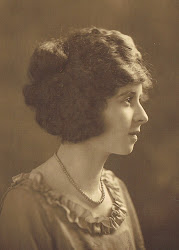